The Gemeenlandshuis in Delft houses the main office of the Delfland Water Board. 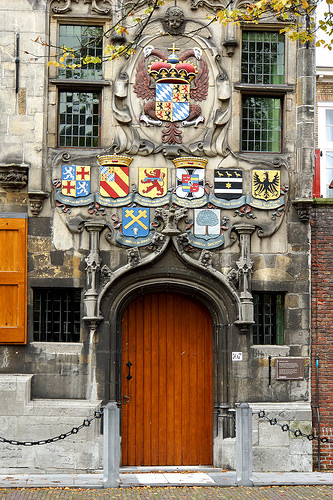 The Water Board HQ in Delft considered and actioned Flood control in early Holland is often called the Teerschouw, which loosely translated means “consumption during observation”. This was a periodic check of the dike systems round about by the Dike-reeve and his team. If they found a problem, they would go to the nearest house or inn, and stay there for free until the problem was fixed. Nice work if you can get it

The Late-Gothic building, situated on the Oude Delft 167, was built in 1505. The first owner was Jan de Huyter, bailiff of Delft and steward of Delfland. Later occupants were Philips, Count of Hohenlohe who was married to Maria of Nassau, a daughter of Willem of Orange. The Delfland Water Board has been established here since 1645. The building contains a large collection of old maps of Delfland. A large number of Coats of Arms (or heraldic shields) cover the sandstone façade. Fortunately the façade was spared during the fire of 1536 which burned through the city of Delft. The main entrance to the Delfland Water Board is now situated on the Phoenixstraat where more recently buildings been added on.