The New Church (Nieuwe Kerk in Dutch) is a Protestant church in the city of Delft in the Netherlands which we will see on our Delft Tour.

The tower is a landmark in Delft and is 108.75 meters high, making it the second tallest church tower in The Netherlands. Only the Dom Tower (Cathedral Tower, Dutch: Domtoren) of Utrecht is taller at 112.5 metres…

However, it was from the top of this tower that the scientists Simon Stevin and Jan Cornets de Groot (father of the legal expert Hugo) carried out their famous gravitational experiments. Using a couple lead cannon balls – one of them ten times heavier than the other – the scientists showed that heavy and light objects of the same size fall to earth at the same speed.

The tower can be climbed on certain days and times for Euro 3.50 p.p. but it is a considerable climb that Tour Delft recommends for the fantastic views over Delft and surrounding area, but only for those of you that feel really quite fit I’m afraid. There are 3 different levels open to the public but even the first is a non-trivial height.

The building is located on Delft Market Square, opposite to the City Hall. In 1584, William the Silent was entombed here in a mausoleum designed by Hendrick and Pieter de Keyser. Since then members of the House of Orange-Nassau have been entombed in the royal crypt. The latest are Queen Juliana and her husband Prince Bernhard in 2004. The private royal family crypt is not open to the public. The church tower (which can be climbed by the fit for amazing views of Delft) is the second highest in the Netherlands, after the Domtoren in Utrecht. 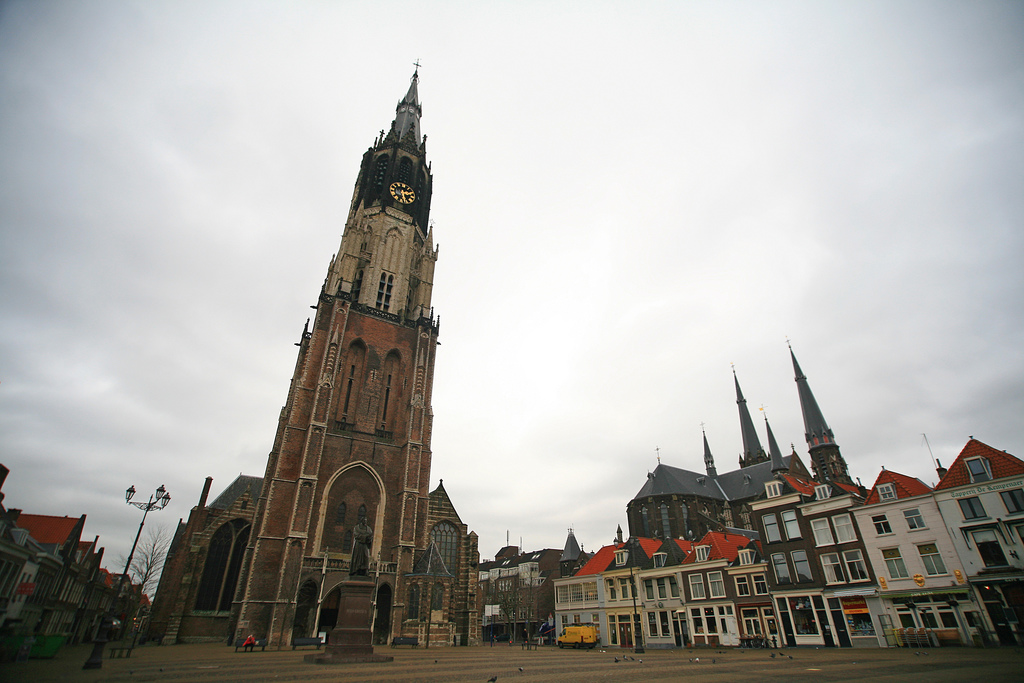 The New Church, formerly the church of St. Ursula (14th century), is the burial place of the princes of Orange. It is remarkable for its fine tower and chime of bells, and contains the splendid allegorical monument of William the Silent, executed by Hendrik de Keyser and his son Pieter about 1621, and the tomb of Hugo Grotius, born in Delft in 1583, whose statue, erected in 1886, stands in the market-place outside the church. The tower was built 1396-1496 by Jacob van der Borch. The monument for Hugo de Groot was made in 1781. The mechanical clock has 18 bells by Francois Hemony from 1659 and 30 modern bells.